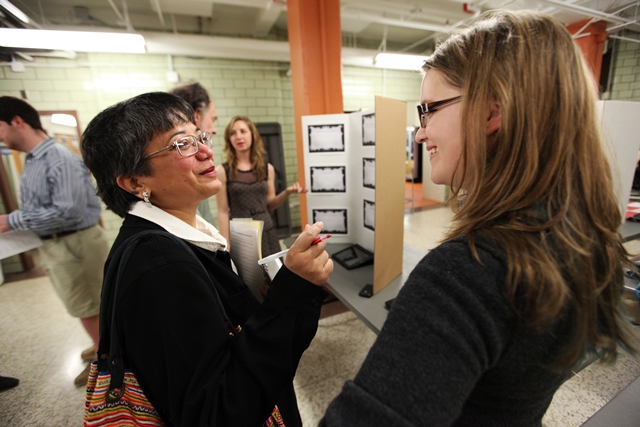 Fifteen A&S Wired students gathered at Keeneland Hall on Wednesday, Feb. 29, to showcase their knowledge of human subject protection, cell biology, research ethics and history. With posters, movies on iPads, handouts and PowerPoints, they presented information on this wide array of topics — material they researched extensively in only eight weeks.

The course, "A&S 100-12 Cell Biology, Society and Research Ethics: The Immortal Life of Henrietta Lacks," focused on the medical and social significance of a woman who died in 1951 and whose cancerous cells laid the foundation for many aspects of future biological research.

"It was typical in the '50s for doctors to take tissue samples and study them," Wired student Samantha Hogan said. "When they took Henrietta Lacks' cancerous cells, (the researchers) found that they could live outside of her body; they could keep them alive in a cell culture. So, that was a really big deal because they had never been able to do that with human cells before."

Researcher George Otto Gey and his team discovered that the virulent cervical cancer cells, which were extracted without Lacks' knowledge, didn’t die under proper culture conditions. He named the cells “HeLa” cells, and he mailed them to researchers worldwide. Since then, the strands have contributed to developing the polio vaccine, as well as research on AIDS, the effects of radiation, cancer, gene mapping and other scientific developments.

The course spanned across the various topics embodied in Lacks' case. The students examined the biological foundations of immortal cells, debated the ethics of scientific research and discussed the implications of clinical studies on the reproductive system.

"Basically it was about looking at this book from every possible perspective," Hogan said. "I think there was something like 60,000 published papers about research done on her cells, so they are really important to the field of science. But we also learned about all of the other factors surrounding her life and her significance."

The students each prepared presentations, displaying their research on particular aspects of ethical protection of human subjects, and drawing from both team and individual projects. In an open forum at Keeneland Hall, faculty from various UK departments visited to view the students' work.

Freshman Samra Nageye provided an overall view of the course for her presentation, which she presented using an iPad. Nageye focused on the particular parts of the course that she found most interesting.

"My favorite part was the hands-on experience," said Nageye. "We went to the King Library Archival Collections, and we got to analyze records from a trial they did in the 1960s. It was very interesting — being able to look at that and learn from that and speculate how women felt. It opened my eyes to the world and to the implications of research."

The class catered to multiple interests. Hogan, an anthropology and classics major, said that she enjoyed utilizing a scientific perspective, a view so different from her typical coursework. Freshman Alex Cahoon, conversely, said the class tremendously contributed to her studies in biology.

"I'm a biology major, so it was really interesting to me off the bat," said Cahoon. "Most of us are biology people, so I think that's why most of us chose this class. I had the knowledge already, so this class helped me to run with it."

Rita Basuray, a new instructor at UK, taught the course.

"I don't typically teach undergrads; I teach physicians, so I was not sure what to expect from my students," Basuray said. "But I am very impressed, and I am blown away. I can't tell you how excited I am with their level of enthusiasm,  excitement and how much they really got into it."

Using a team-based learning approach, Basuray divided the students into groups and gave them entirely new topics to research. She said she appreciated the amount of help the students gave each other.

"I would tell them about something completely new, cell biology for example, and they would go to the Internet and search and help each other out, and then write a final report," Basuray said. "I'm completely happy with the results."

After covering such an abundance of content in eight weeks, Cahoon said the course gave her confidence for future academic pursuits.

"We learned so much about research — research that's gone wrong, research that was done well — so it's given me a good perspective on that area. I think that what I learned will be very useful in the future."