Off DeWall: The Pain of Paying

Ever feel that it actually hurts to buy something? Maybe it was that pair of shoes you had to have that cost $500 but broke within three months? Or that $7 coffee beverage that your friends said was so great but you knew was overpriced? I experienced something akin to pain today, but it took an odd form. 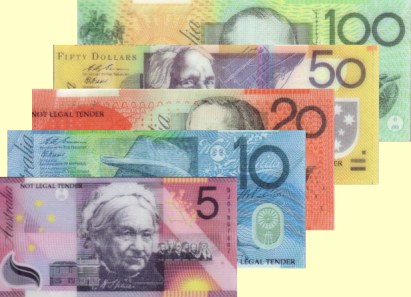 Psychologists have been studying the pain of paying for over a decade. It’s based on the principle that it hurts more to make some purchases than others. The more a purchase hurts, the less people are willing to make it. After all, who wants to experience pain, no matter how much you think you want something?

As one example, it hurts more to use cash to pay for things than to use credit. When you fork over your cash to buy a pair of shoes, it hurts you more than if you gently swipe your card. This is why using cash – such as the Australian currency to the left – is an effective strategy to control your spending. My wife and I pay cash for almost everything. At the beginning of every week, we go to the cash machine and get what we budget for the week. Even people who pay their credit cards off at the end of every month will spend more than people who pay cash for everything.

Don’t believe me? Let’s look at an empirical example. In one great study, Carey Morewedge and his colleagues checked the receipts of people as they left a nice grocery store. Customers who paid with cash spent significantly less money ($6.65) than customers who paid with credit ($11.45) or even a debit card ($11.08). Paying with cash hurts, so people refrained from spending it more than the people who swiped their cards.

My pain of paying took a slightly different angle. It was when I realized it was more painful for me to spend my money than to spend someone else’s money. When I travel on business, the institution or company that hires me usually pays me a fee and covers my expenses. I keep my receipts to cover any costs I incur on the way and returning from the trip (for example, parking at the airport, coffee, a meal if I need one). When I return home, I send my receipts to their accountant who cuts me a reimbursement check. Easy, easy.

Today I had a curve ball thrown my way: I learned that I receive a daily per diem, and everything I don’t spend I get to keep. Suddenly I’m not being reimbursed for my expenses; I am choosing to use my own money. How do you think this affected my spending?

You’re probably right: I spent a lot more yesterday (prior to knowing about the policy) than I did today (after I learned about the policy). Being naturally frugal, I know that I’ll continue to spend the way I normally do back in the States. Instead of dining out for three meals a day, I’ll probably eat a bit at my apartment. Instead of getting that behemoth coffee with the extra shot of espresso, I’ll probably refill my bottle of water in the sink. After all, I’m not a glutton for pain – especially when it’s the pain of paying.

This sort of thing is probably natural. It hurts more for me to spend my own money that it hurts to spend yours. Unfortunately, this means that I will spend more than I need to when I know that I’m not paying. The bright side is that this experience has taught me the value of consuming only what I need, no matter who is paying. By taking the perspective of others, I can feel their pain of paying – and spend less as a result.